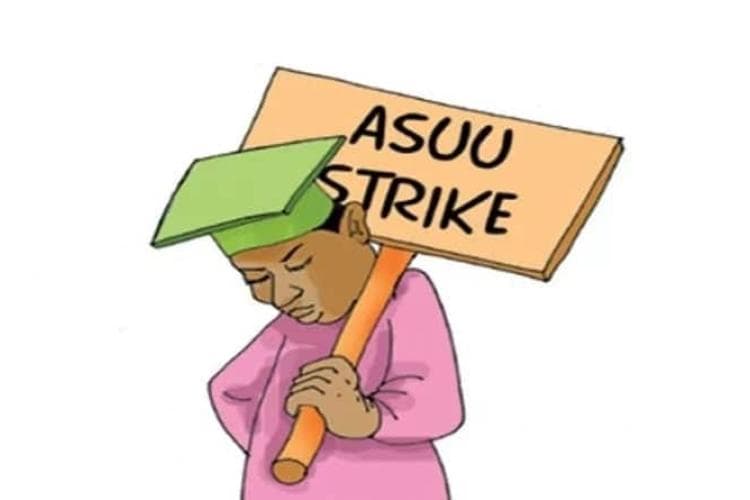 The Academic Staff Union of Universities, ASUU, University of Nigeria, Nsukka, UNN, chapter, on Tuesday, vowed to commence the “mother of all strikes,” if the Federal Government refuses to pay members of the Union their withheld eight months salary arrears.

The ASUU-UNN Chairman, Comrade Christian Opata, who addressed pressmen before members of the Union embarked on a peaceful protest at the UNN main campus in Nsukka, Enugu State, said the Institution would not hold any Senate or Departmental Board meetings to approve Students results.

Comrade Opata said that “it raises a moral question,” for the Federal Government to renege on honouring agreements it signed with the members of the Union since 2009.

He equally said that the government is tactically “unleashing anarchy on the nation,” by adopting no-work-no-pay strategy and equally expecting members of the Union to do all the arrears of academic works accumulated during the period of the industrial action, adding that students who may not be graduated as a result of government’s action on the Union may plunge the nation into anarchy.

The ASUU-UNN Chairman however, said that the members of the Union are not in confrontation with the University Management in their efforts to seek redress from the Federal Government.

“We are still running the 2020/2021 academic session and students are being graduated, yet, government is telling us no-work-no-pay. ASUU can accept that condition and decide not to graduate older students, except those admitted this year. Can government hold us culpable if we do this? Can they sustain the pressure which would be coming from students who may not be graduated? Would government not be unleashing anarchy on the nation?

“ASUU has a lot of options before it but the Union does not want to throw the nation into maximum anarchy,” Comrade Opata said.

Some members of the Union who protested to the Vice Chancellor’s office and other faculties in UNN bore placards with the following inscriptions:”We say no to bad governance, ASUU members lives matter; pay us our salary backlogs; no pay, no 2020/2021 academic session results. We say no to pro-rata; our Government does not honour agreement; get ready for mother of all strikes,” among others.

Photo: The Chairman of ASUU-UNN, Comrade Christian Opata, speaking at the Vice Chancellor’s office at UNN during ASUU protest in UNN, Tuesday.