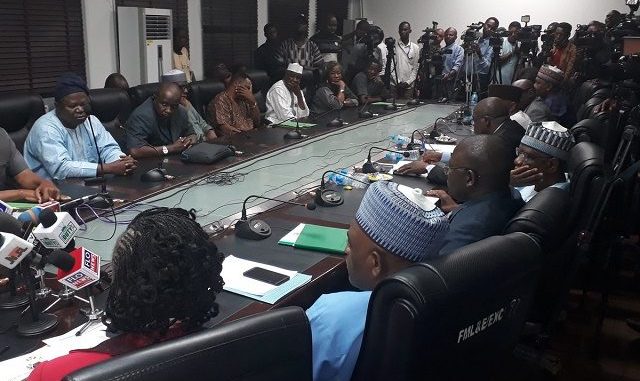 There seems to be no end in sight to the ongoing strike by the Academic Staff Union of Universities (ASUU) as the Federal Government and the union Thursday stuck to their guns.

The Minister of Education, Adamu Adamu, told State House reporters in Abuja that President Muhammadu Buhari rejected a report he submitted on the lecturers’ demand for payment of their salaries during the six-month strike period.

ASUU has been on strike since February 14 over government’s failure to implement its demands on salaries and allowances of lecturers, improved funding for universities and the adoption of the University Transparency and Accountability Solution (UTAS) against the government’s preferred payment platform, Integrated Payroll and Personnel Information System (IPPIS).

Speaking at the 47th session of the State House briefing organised by the Presidential Communication Team, Adamu noted that the implementation of the government no-work-no-pay policy was the only condition delaying the truce with ASUU.

“All contentious issues between the government and ASUU had been settled except the quest for members’ salaries for the period of strike be paid, a demand that Buhari has flatly rejected,” he said.

The minister explained that the request was rejected to curb the excesses of trade unions that wanted to be paid for work not done.

He said Buhari’s position had been communicated to ASUU.

Reacting in an interview with Daily Trust, ASUU President, Prof. Emmanuel Osodeke, said: ‘’When they say they’re not going to pay our salaries during the strike, fine! Whenever we resume, if it’s one year’s time, all those admissions JAMB has done, we have two sets of JAMB waiting that we’re going to teach, they’ll cancel them and we start afresh completely. Let’s see how Nigerians will react to them.”

A Senior Advocate of Nigeria, Paul Ananaba, in a chat with Daily Trust, said no law backs the no-work-no-pay policy, arguing that the striking ASUU was exercising its fundamental right.

He said: “The pronouncement of the policy is not law.”

The minister also said yesterday that the UTAS payment system proposed by ASUU had outscored the IPPIS already in use by government.

He noted that the IPPIS had been updated to accommodate payment of lecturers on sabbatical.

Adamu said the government had proposed a new salary to the unions which, he added, the Senior Staff Association of Nigerian University, the Non-Academic Staff Union of Universities and Allied Institutions and the National Association of Academic Technologists, had accepted in principle, but were currently consulting with their members with a view to calling off the strike in the next one month.

He said the government was doing everything possible to conclude the negotiations.

Responding to a question on the need to compensate students for the time wasted during strike, he said it was the responsibility of ASUU to do that and not the government.

The minister said the students should “take ASUU to court” to claim damages incurred over strike period.

According to him, the government bears no liability to compensate millions of students grounded for six months over lost time.

Adamu also said the Buhari’s administration had expended N6,003,947,848,237 in capital and recurrent expenditure in the education sector in the last seven years.

He said this was in addition to interventions from the Tertiary Education Trust Fund and the Universal Basic Education Commission totaling N2.5trn and N553,134,967,498.50 respectively in capital investment.

He said the number of out-of-school children had dropped from an estimated 13 million to 6.9 million with an impressive enrollment in Kano, Kaduna, Katsina, Sokoto, Gombe, Bauchi, Adamawa, Taraba, Rivers and Ebonyi.He attributed the feat to activities of the Better Education Service Delivery for All (BESDA).

On the revitalisation of the teaching profession at the basic and secondary levels, Adamu said after Buhari approved the document, the policy had become an Act of the National Assembly and the elongation of years of service had been implemented.

He said a provision had been made in the 2022 budget for bursary allowances for deserving students in education courses across universities.

The minister, who added that free education for four biological children of staff in unity colleges nationwide was with effect from the 2023/2024 academic session, said relevant departments were already working on modalities for inclusion in the 2023 budget.

Adamu said the country currently had a total of 25,782 senior secondary schools and approximately 3.2 million learners.

Earlier yesterday, ASUU President Osodeke had given an insight into what transpired between the leadership of the union and the delegation of the government during Tuesday’s meeting headed by Prof. Nimi Briggs-led committee.

Osodeke, in a statement, said the union rejected the government’s offer because it “is miserable”, adding that all excuses and the offers given by the officials were not tenable.

He said the government should, through the Ministry of Education, return to the New Draft Agreement of the 2009 FGN/ASUU Renegotiation Committee whose work spanned a total of five-and-half years as a demonstration of good faith.

He said: “The major reason given by the Federal Government for the miserly offer, paucity of revenue, is not tenable. This is because of several reasons chief of which is poor management of the economy. This has given rise to leakages in the revenue of governments at all levels.

“There is wasteful spending, misappropriation of funds, and outright stealing of our collective patrimony. ASUU believes that if the leakages in the management of the country’s resources are stopped, there will be more than enough to meet the nation’s revenue and expenditure targets without borrowing and plunging the country into a debt crisis as is the case now.”

He alleged that the government allowed the ongoing strike to linger with its (government’s) provocative indifference, calling on well-meaning Nigerians to hold the government responsible.

According to him, this is injurious to Nigeria’s aspiration to become an active player in the global knowledge industry.

He stated: “Rejecting a salary package arrived at through collective bargaining is a repudiation of government’s pronouncements on reversing ‘brain drain’.

He also stated that the New Draft Agreement had other major recommendations for the funding of major components of the renegotiated 2009 FGN/ ASUU Agreement.

Osodeke noted that “one of such recommendations is the tax on cellphone and communication lines. Ironically, the Federal Ministry of Finance, Budget, and National Planning recently announced its readiness to implement ASUU’s recommendation, as a revenue source, but not for education, without acknowledging the Union!”

Reacting, the president of the National Association of Nigerian Students (NANS), Sunday Asefon, in a statement, called on ASUU to be considerate and consider students’ interest.

He said: “ASUU trying to hold the nation into ransom is unpatriotic and self-serving. We, therefore, advise state governments whose tertiary institutions are on strike to take every reasonable measure to ensure resumption of academic activities as the current strike should never have affected state universities.”

Osodeke noted that “one of such recommendations is the tax on cellphone and communication lines. Ironically, the Federal Ministry of Finance, Budget, and National Planning recently announced its readiness to implement ASUU’s recommendation, as a revenue source, but not for education, without acknowledging the Union!”

Reacting, the president of the National Association of Nigerian Students (NANS), Sunday Asefon, in a statement, called on ASUU to be considerate and consider students’ interest.

He said: “ASUU trying to hold the nation into ransom is unpatriotic and self-serving. We, therefore, advise state governments whose tertiary institutions are on strike to take every reasonable measure to ensure resumption of academic activities as the current strike should never have affected state universities.”