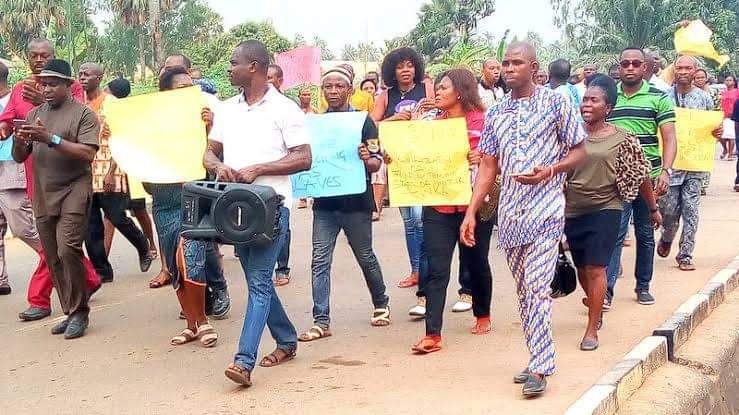 INDICATION emerged on Sunday that the non-teaching staff in the universities are mounting pressure on their leadership to declare industrial dispute following the alleged Federal Government failure to keep to the April timeline for the implementation of the Memorandum of Action, MoA it entered with the unions

The union members have lamented that after about 14 months the Consequential Adjustment for the new minimum wage came into effect, the government was yet to start its implementation.

Speaking to journalists at the weekend, the President of the Senior Staff Association of Nigeria Universities, SSANU, Comrade Mohammed Haruna Ibrahim confirmed the pressure from his members to resume strike.

According to him, “We met with government some few months ago and we had an understanding after going on strike for three weeks. A lot of pressure was put on us; a lot of persuasions and we talked with the government and saw the reason to suspend the strike because the government tried to paint the picture of being sincere and we needed to give them an opportunity to do one or two things to ensure that our demands are met

“As you are aware, our demands are not new demands. These are things that have been lingering for eleven years. We had an agreement with the government in 2009 and till today, a lot of such issues are still lagging behind; especially things that involve some payments of our allowances.

“We saw reasons to suspend because we felt the government was sincere and the timelines given by government – not us was that by end of April most of these issues will be sorted. We still believe a miracle can happen.

“Outside that a lot of our members are agitated, we are under a lot of pressure to go back to the trenches because even when we called our members to interact with them with pressed on them to give the government a chance.

“We are hoping that government will not disappoint us and paint us like liars before our members. Where the government doesn’t meet the timeline one cannot guarantee industrial peace because we have been taken for a ride for too long.

Out of the seven issues we tabled before government three or four have been handled. For example the issue of the visitation panel: currently the panels are all over the universities. The issue of discrepancies in our salaries is also being handled by the IPPIS committee.

“But payment of the consequential adjustments for the new national minimum wage and the allowances that are encapsulated in our agreements contained in the earned allowance; these are still things that are lagging behind and there is no end in sight, to say the least.

“While the government has attempted to address some of the problems the ones that touch us directly- the ones that involve our pockets have not been addressed. Because of the insecurity inflation has skyrocketed. The prices of items have changed. Our members the little they get as salaries cannot even take them home. By the time you make a few purchases money is gone.

“We are pleading with the government to ensure that they don’t embarrass us as elders in our different unions, that all those agreements we have reached with them which they promise that they will see the light of day by the end of April come to see the light of the day but where it doesn’t, out hands are also tied as leaders.

“We never called off the strike, we only suspended it meaning that our notice is still with the government but by the expiration of this Memorandum of Action, all we need do is to call our people and inform them that government has failed us and they will tell us the next line of action to take.

“For us, in SSANU we are not struck mongers, we believe in engagements. Even when we went on strike it lasted for three weeks and because we believe that things can be done differently but where we are pushed to the wall we may have no reason other than to react.

“As I told you some of the issues we have with government – all the non-monetary aspect are being handled. Clearly, we have seen it but where it concerns giving out money to members who are paying their dues by working is where the government is reneging.

“For example, the payment of the consequential adjustment, the implementation of the EA in our salaries – these are the areas government is still lagging behind and the issue of non-remittance of pension deductions. Our members who have retired cannot access their money that has been collected on their behalf and lodged in the PFAs. This is a very pathetic situation.

It was reliably gathered that the Minister of Labour and Employment, Senator Ngige has promised to wade into the matter to ensure that it didn’t lead to a strike.