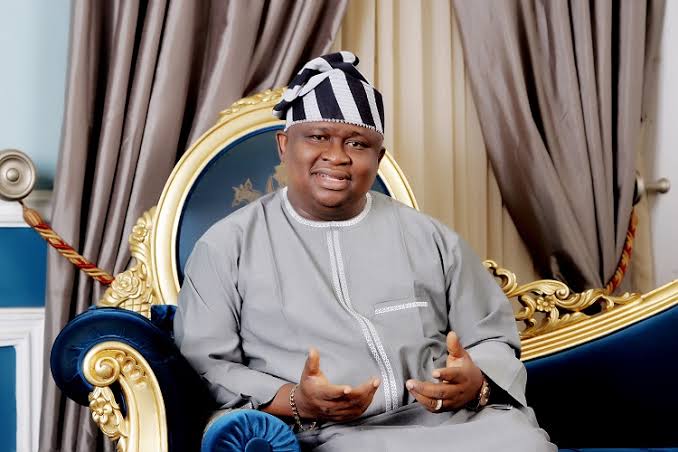 Adeola, who is the Chairman of the Senate Committee on Finance, had recently urged the government to have a rethink on funding government-owned tertiary institutions, their salaries as well as recurrent expenditure.

In a statement made available to our correspondent, the Coordinator of the NANS Zone D, Adegboye Olatunji, knocked the senator, describing his statement as ridiculous.

The student body also vowed a serious showdown over the ongoing strike action embarked upon by the Academic Staff Union of Universities.

Speaking further in the statement, the students also tagged Adeola of being ignorant of the processes and activities going on in the university system.

“The Chairman, Senate Committee on Finance, Senator Solomon Olamilekan, during an interactive session with revenue generating agencies on 2023-2025 MTEF/FSP, lamented that some universities generate N17 billion annually and expend all, with no justification on how the funds were expended,” Olatunji said in a statement on Monday.

“We watched with utter dismay the video of the Senate Committee on Finance, Solomon Olamilekan, where he declared that the Federal Government should stop funding education. We find the statement very ridiculous and irresponsible of a lawmaker.

“We were expecting Senator Solomon to know better. But, alas, we were proven wrong by his sheer display of ignorance. We could have categorised it as wilful ignorance but it is obvious that the Senator does not understand what the business of governance is.

“We may conclude that Senator Solomon and other members of the Committee, like many other government officials out there, are lacking the knowledge of what Section 18 of the Constitution of the Federal Republic of Nigeria, 1999 (as amended) says on the enforcement of public education right in Nigeria.

“It is also disturbing that these same people forget that they appoint members of Governing Councils for these institutions. And, if the import of what Senator Solomon is saying is that they are not aware of how the generated revenue is being spent, the Senate Committee on Tertiary Education has been nailed of inefficiency.

As much as we know, fees are now being paid to the purse of the Federal Government through Remita. Meanwhile, the essence of the Treasury Single Account is to enhance government revenue generation and to ensure transparency and accountability in government expenditure. Unfortunately, revenue leakages are still rampant in several ministries thereby defeating the purpose of the TSA.

“Education, as much as we know, is in the concurrent list which implies that the bulk of the responsibility falls on both State and the Federal Governments. Unfortunately, successive government in the country has failed to invest in the educational sector.

“In the said video, the lawmaker was seen decrying the inability of managements of tertiary institutions to remit ‘reasonable sum’ to the purse of the Federal Government. This now leaves us to ask if the essence of institutions of learning is profit-making or impacting knowledge.

“This is not surprising as we are aware of a Federal Government report of 2012 that recommended that our Universities should start paying between N450,000 to N525,000 as tuition fees. It is also on record that the Federal Government brought forward same recommendation to ASUU in 2020. The plan has always been to take public education out of the reach of the poor (which we shall fight to a standstill). And, this is the reason the government has been recalcitrant in resolving ASUU strikes.

“They are not interested in education funding. They would rather prefer we remain slaves to their kids who now enjoy oversea education than to invest in the country’s educational sector. Meanwhile, the Nigerian tertiary institutions were a sort of Mecca to foreigners prior mid-1980s.

“However, as an association, we insist that education must be free at all levels, functional, and we call on the Federal Government to invest massively in public education. We maintain that education remains a right and the Nigerian State must be mandated to fund same. Even in advanced countries where their institutions are self-dependent with huge endowment fund, the government still does follow-up by budgeting heavily for the institutions.

“It is a shameful act to come out and blame ASUU for your lack of proper management of the national resources. What we can make out of the embarrassing statement of the Senator is that the Senate Committee on Finance is indirectly saying that Public Universities should be privatised. The question we ask them is how well are the privatised national corporations like water, power etc functioning if not that this same government still gives them bailout funds after selling them? No doubt, the Nigerian students will be back to the streets very soon, and with such mobilisation that will make #EndSARS look like a joke.”